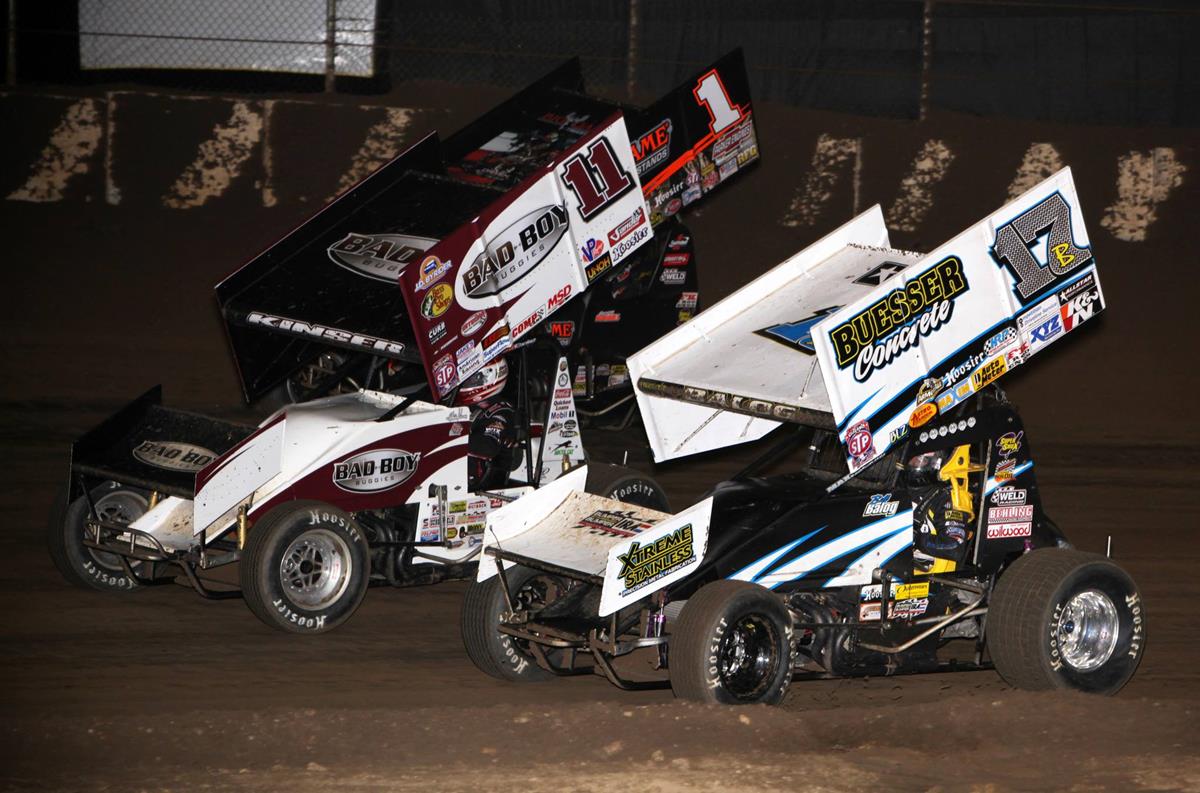 Bristol, WI – December 31, 2013. As 2013 comes to a close, Bill and the B2 Motorsports team looks back at another successful season and looks for more of the same in 2014. The season started back in April as the teams started the year at the Beaver Dam Raceway with a record setting victory with a last corner pass of Mike Kertscher beating him to the checkered flag by a .009 second margin. Bill and the team made their maiden voyage to the famous half mile of the Eldora Speedway the following weekend with the World of Outlaws and the team struggled at the wicked fast track with the new Hoosier tires also throwing a curveball the team’s way. Both nights at the Eldora Speedway ended in the B-main. The following weekend the team continued on with the World of Outlaws as the traveled to the clay covered asphalt track of the Elko Speedway in Minnesota. The team struggled with mechanical gremlins and handling issues once again in Elko, but continued on to the Knoxville Raceway the next night where the 17B would run out of fuel in the B-main with several cautions and red flag periods.

Bill and the B2 Motorsports made their second appearance at the Beaver Dam Raceway the next weekend, but the roles were reversed at the finish this time as Bill would trail Kerscher to a 2nd place finish. The following weekend, Bill made his first of several starts in the Lein Acres #2 at the Angell Park Speedway mustering an 11th place finish after having tire issues early. The following night Bill would return to the cockpit of the 17B sprinter where he would pick up his 2nd win of the year at the 141 Speedway.

The following weekend saw the hauler head north to the Cedar Lake Speedway for the Triple Crown where Bill would have a clean sweep of the program picking up win #3 of the season and would pick up win #4 the following night at the Eagle Valley Speedway. The team headed to Iowa the following weekend to the 34 Raceway to take on the Outlaws again where the team missed the show by one position in the B-main. After looking at the forecast for Knoxville, the team headed back close to home for another run at the Beaver Dam Raceway where Bill parked the 17B in victory lane for the 6th time in 2013.

The next weekend, NASCAR superstar Tony Stewart was in the house as he was in town to take on the IRA at the Sheboygan County Fairgrounds. Bill led early until getting bottled up in traffic allowing “Smoke” to sneak by on lap 21. Bill regained all lost ground and slid back by smoke with four laps remaining as the pair swapped the lead several time with Stewart nipping Bill at the line before the rain came. The next weekend brought the team’s 2nd clean sweep and 6th win of the season at the Oshkosh Speedzone Raceway, a track that Bill and the B2 Motorsports team seems to have a stranglehold on.

The Outlaws came back to the area the following weekend to tracks in the area that the team was familiar with as the team racked up 3 – top eleven finishes including 2 – dash appearances. They finished 5th at LaSalle Speedway, 11th at the Beaver Dam Raceway after running away with the B-main win, and a 6th place run at the Cedar Lake Speedway.

The team made their first appearance at the Wilmot Raceway on the 4th of July weekend and they picked up their 7th win of 2013 on a tricky track. Bill would break the track record, win his heat race, and win his 8th feature of the season at the Dodge County Fairgrounds the following Friday night. He would follow that up with Win #9 the next night at the Rice Lake Speedway in front of his friends and family in the town of Rice Lake, WI. Returning to the Wilmot Raceway the following weekend, Bill and the B2 Motorsports geared up to take on the All Star Circuit of Champions as Bill would charge forward to a 4th place finish.

Bill and the B2 Motorsports team returned to the Langlade County Fairgrounds for the first time since 2007. The team struggled early, but ironed out the issues and picked up Win #10 at the big half-mile. Win #11 came the following Saturday, once again at the Beaver Dam Raceway. The team headed to Knoxville for a last chance warm up before the Knoxville Nationals in which they ended the night finishing 11th in the B-main of the eighty-two cars on hand.

At the Knoxville Nationals, the team made the feature finishing 19th on their qualifying night, but did not gain enough points to lock into Saturday night’s big show. The 17B sprinter missed the transfer into the feature from the heat race by one position on Friday night sending Bill into the B-main where a lap #1 incident ended the night sending the 17B into the E-main on Saturday. After transferring out of the E-main, Bill charged forward through the D-main to a 12th place finish after starting 21st.

The team returned to the Wilmot Raceway for a 2-day show for the Kenosha County Fair the following weekend. After changing the engine after qualifying, Bill would transfer through the B-main into the A-main where he charged again to come up just short of another victory finishing in the 2nd position. The next night was a new night and Bill would pick up the Roger Isles Memorial race which would be victory #12 of 2013. Sunday night Bill would return to Angell Park Speedway in the Lein Acres #2 and charge forward to an 8th place finish. The team headed to the LaSalle Speedway for the annual Bill Waite Memorial Race the next weekend where Bill and the team have picked up the previous two titles. Bill made himself a three-time winner of the event that night at he picked up win #13 and another clean sweep at the bullring.

Another fair race was on tap the following Friday at the Sheboygan County Fairgrounds. A lap one incident collected most of the field including Bill as he would restart 14th after making repairs. In 14 laps Bill charged to the lead and never looked back picking up Win #14. The Pepsi Nationals at the Angel Park Speedway was up next as Bill would bring home a 9th place finish after running 5th most of the night and a 3rd place finish Sunday night as he ran near the front all night.

Bill and the B2 Motorsports team made their final trip up north the following weekend to the Amsoil Speedway as the reigning Northern Nationals Champion. After spinning to avoid a car on lap one, Bill restarted last and charged to a 2nd place finish. The team struggled the following night at the Cedar Lake Speedway, having to run the B-main which Bill won, and gained five positions to a 7th place finish in the A-main.

The team headed back to the Oshkosh Speedzone Raceway the following Friday for a make-up show where Bill would put on another clinic as he swept the show again picking up win #15 of the season. The following night was a dogfight for 27 laps in honor of Frank Filskov. Bill, Scotty Neitzel, and Steve Meyer fought the whole race until Bill slipped by on the high side of the track with two laps to go in which he picked up Win #16 of 2013 and IRA feature Win #61, which tied the all-time record held by the 9-Time Champion, Joe Roe. The team headed back to the Beaver Dam Raceway for the final time of 2013 the next Saturday. Starting deep, Bill charged forward from his 10th place starting position on a very narrow track and picked up Win #17 of 2013 and IRA Win #62 eclipsing Joe Roe’s all-time feature record making Bill the winningest driver in IRA history.

After a month hiatus, the team hit the road for the final time in 2013 to the Dirt Track at Charlotte Motor Speedway in Concord, NC with the help of several fans, friends, and family members. The team struggled in qualifying setting them up with deep holes to dig out of. Friday night ended with a DNF after a brake failure in the B-main. After some changed to the car on Saturday, the car improved, but with the deep starting positions, Bill would finish in the 13th position in the B-main after running 2nd in the C-main on Saturday night ending the team’s season.

Bill was honored in late November at the IRA’s awards banquet with Bill and the B2 Motorsports picking up their 6th consecutive IRA Championship. The team finished in the top-five in all but one of the twenty-four IRA races that the team competed in. Bill and the team also picked up eight quick time awards picking up the Fast Timer Award courtesy of TW Metals and Osborn & Son Trucking for garnering the most qualifying points throughout the season, thirteen heat race victories, and five clean sweeps throughout the season. Crew member Dave Ramthum also picked up the Mechnixwear Mechanic of the Year award for his efforts.

The team is now back in the shop getting geared up for the 2014 season. We are also in the process of searching for marketing partners for the 2014 season. Please contact Bill at balogb17@yahoo.com or Matt at littlekw022@gmail.com if you have any interest in partnering with B2 Motorsports team in 2014.

Stay up to date with what is going on with Bill and the B2 Motorsports team by checking out the Facebook page at http://www.facebook.com/bsquaredmotorsports. Also remember to check out Bill Balog and the B2 Motorsports Team by visiting www.billbalog.com for driver and crew bios, our schedule, pictures, videos, and to sign our guestbook if you’d like to.