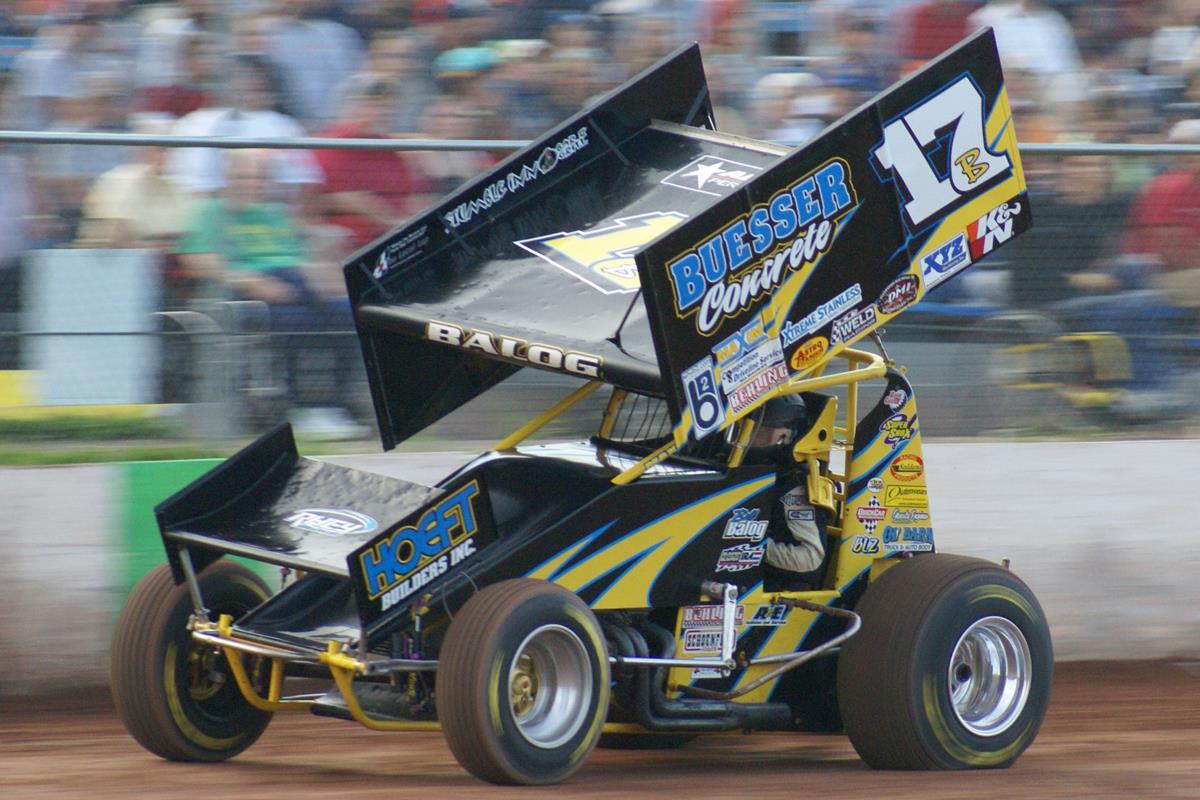 9/15/11 (BG Motorsports PR) – The final 2 day weekend of the 2011 IRA season, seen Bill Balog take on 2 different Northern Wisconsin speed plants. First up was the Amsoil Speedway in Superior, WI for the Annual Northern Nationals. Bill began the night by setting his 3rd Quick Time in a row by turning a lap of 13.182 seconds, which averaged out to 102.412 mph around the high banked oval. By virtue of the qualifying effort, Bill would start 6th in heat race #1. Once the heats finally went trackside, Bill got to work & began the march towards the front. By the midway point (lap 5) he had worked his way up to the 3rd spot. He wasn’t done there as he was up to 2nd shortly after that & that’s where he would finish the 10 lap event. The #3 pill was once again drawn for feature inversion which meant the Maxim Chassis / A&E Collision 17B would line up 6th in the 30 lap Northern Nationals main event. As the field was beginning to take shape on the track, the car who was suppose to start 4th ended up spinning prior to the green flag & would have to go to the tail, which meant the 17B would move up a row & start 4th. When the racing action commenced Bill took of like a rocket & by the 4th lap was up to 2nd when the races 2nd caution waved. Once the field was back to racing, Bill was right on the leaders back bumper, it took a few laps to navigate his way around but on lap 8 he took the point & quickly opened up a sizeable lead. Bill had to endure 2 more caution / red flag periods during the race, but proved to be to strong for the competition as he would go on to claim his 11th IRA win of the year & 2nd Northern Nationals in a row.

The 2nd night of the double header weekend took place at the Cedar Lake Speedway in New Richmond, WI for the $5000 to Win Jerry Richert Memorial. 36 strong teams were on hand for this event, the night didn’t start off well as the 69 pill was drew for qualifying which meant Bill would be the last & final car out to turn a lap. When Bill finally hit the track for his turn in qualifying, he was able to muster up a lap time of 11.627 seconds which ended up being the 5th fastest time of the night. He would pilot the Saldana Racing Products 17B from position #5 of the 1st 10 lap heat race. When the green flag waved, Bill got an excellent start & moved up to the 4th position right away. It took the next few laps to make his way past the 3rd place car & quickly began closing in on the 2nd place car. Once he was able to reel in 2nd place, he spent a few laps waiting to make his way around him; once Bill did he set his eyes on the race leader who had opened up a straight away lead. With 2 laps to go, Bill had closed the gap between himself & the leader. On the white flag lap, Bill made a bold move in turn 1, as he threaded the needle between a lapped car & the race leader. He was able to over take the leader & go on to claim yet another heat race win. The #3 pill was once again drawn for the feature inversion, which would place the B Squared Motorsports 17B outside front row for the $5000 to Win 30 lap feature. At the drop of the green, Bill jumped out to the lead & began to open up a sizeable lead on the field. An early caution would bunch the field back up, but Bill proved to be the class of the field & soon re-opened up a sizeable lead. Bill would have to endure a few more cautions, but every time he would go unchallenged & retain the lead. As the race wore on the track began to take rubber in turns 3 & 4 which meant tires & passing would be come an issue. As Bill was trying to make his way around a lapped car late in the race, he had to move off the rubber which allowed 2nd place, Mark Dobmeier to make his way past Bill & lead lap 28. Bill fought back & reclaimed the lead going in to turn 1; from that point on he would go unchallenged & go to claim the prestigious Jerry Richert Memorial Trophy & the $5000 reward that went along with it.

This week Bill & the B Squared Motorsports team will be in action with the IRA at the Plymouth Dirt Track in Plymouth, WI for the Frank Filskov Memorial. Bill was the winner of this event 1 year ago & also visited victory lane at this track in June of this year.

To keep up on all the latest news regarding the team be sure to visit the team website at www.b2motorsports.com. You can also follow the team on Facebook at www.facebook.com/bsquaredmotorsports or on Twitter at www.twitter.com/bsqdmotorsports.