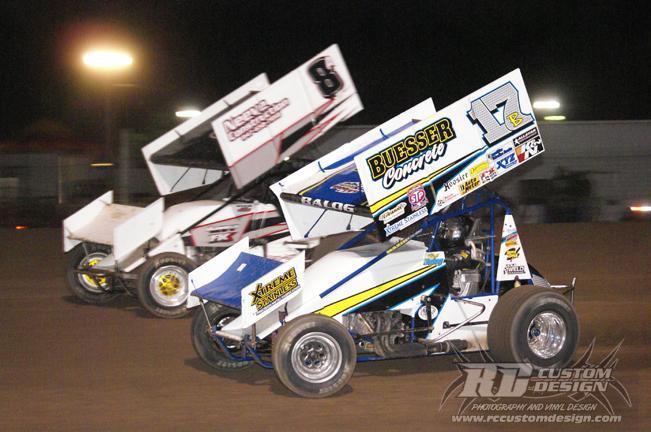 Bristol, WI – September 11, 2013. Bill Balog and the B2 Motorsports team headed to the north woods this past weekend to the Amsoil Speedway in Superior, WI for the Northern Nationals. The night started off with a 4th place qualifying effort of the twenty-two cars on hand lining Bill up with a 5th place starting position of the first heat race. Bill would make his way into the 4th position a couple laps in the heat race as he trailed the duo battling hard for the 2nd and 3rd positions. At the halfway mark, Bill would make his way past the two cars and try to track down the leader that built a huge lead. Bill would gain ground on the leader, but would have to settle with a 2nd place finish in the heat race. Lining up 5th in the feature Bill would make it through two caution periods on the opening lap, but the third caution Bill was not lucky enough to sneak through. Coming out of turn four, a car was spinning on the high side of the track and Bill would spin to avoid a disastrous wreck. After a quick visit to the work area, the crew sent Bill back to the track where he would restart in the 20th position. Bill would not stay there long as the charge was on and in nineteen laps made it back up to the 3rd position. Red would fly on lap twenty-one and once back out Bill battled with 2nd place running Scott Uttech for the next several laps and then setting his sights on the lead of Scotty Neitzel. Bill would make a charge, but could not make up enough ground as he would follow the #2w sprinter under the checkered flags to finish in the 2nd position.

The team headed south to the Cedar Lake Speedway in New Richmond, WI for the annual Jerry Richert Memorial Race on Saturday night. The Bill would lay down the 4th fastest lap for the second night in a row of the twenty-nine cars on hand setting him up with another 5th place starting position in the first heat race. When the green flew Bill would make his way up to the 3rd position, but on lap four he would spin the 17B sprinter in turns one and two sending him to the back for the restart. Bill made his way back to the 6th position, but that would not be good enough for the transfer sending Bill to the B-main. Lining up on the pole of the B-main, Bill would cruise to a convincing win transferring him to the feature where he would line up in the 11th starting position. Marred back in traffic on a somewhat tricky track, Bill would make his way up to the 7th position where he would take the checkered flag at the three-eighths mile track.

This Friday, Bill and the B2 Motorsports team will head up Highway 41 to the Oshkosh Speed Zone Raceway in Oshkosh for a makeup date from back in April. Bill has been in victory lane at the third-mile facility the past three visits. The team then makes the hour trip over to the Sheboygan County Fairgrounds in Plymouth, WI on Saturday night for the Filskov/Portschy Memorial. Bill was victorious at the quarter-mile bullring just two weeks ago in a charge from the 14th starting position after a lap one incident. Please check our Facebook page for any last minute changes to our schedule by going to http://www.facebook.com/bsquaredmotorsports. Results throughout the night are also posted on our Facebook page provided there is service at the track. Also remember to check out Bill Balog and the B2 Motorsports Team by visiting www.billbalog.com for driver and crew bios, our schedule, pictures, videos, and to sign our guestbook if you’d like to.