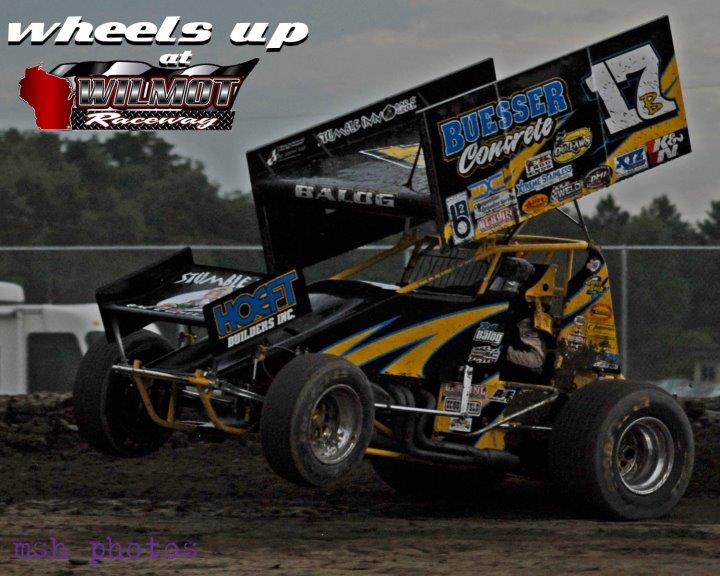 08/25/11 (B Squared Motorsports PR) – The annual stop at the Wilmot Raceway during the Kenosha County Fair was the next event on Bill Balog’s 2011 tour; the night began with Bill turning a lap time of 14.100 seconds which was fast enough for 5th quick out of the 36 cars. Just as heat race action was set to begin, a light rain shower moved in, which prolonged the start of racing action for about 2 hours. Finally getting the racing action under way, Bill was set to start 5th in the 1st of 4 heats. With the track still very greasy & narrow, track position was very important. Once the race was green, Bill maintained track position until lap 2 when he drifted high in turn 1 & fell back to 8th after losing all traction on the high side of the speedway. He spent the rest of the 10 lapper making up ground & would end up bringing home a 6th place finish, which meant he was headed to the 15 lap B-main. He would take the green from position #2 in the B, & quickly jumped out to the lead. He went on to lead every lap & claim his 1st B-main win of the 2011 season, which was good enough to move on to the 36 lap main event where he would start 11th. As the field was rolling to the green flag, the front row starters decided to do a jack rabbit start which in turn caused the rest of the field to take evasive action & resulted in some front end damage on the 17B as Bill inadvertly got in the back of the 02. As the yellow was displayed for a spinning car, Bill rolled to the work area & the crew checked the car over & pulled the nose wing back forward & sent him back out to join the tail of the field. With only one direction to go, Bill was set to get to work & began his march through the field. He soon was in the top 15, then top 10 & worked his way all the way in to the top 5 before more mechanical gremlins forced him pit side which resulted in a 18th place finish. After the crew checked things over it was discovered that all the rear brake rotor bolts had been sheared off resulting in a los off brakes for Bill & the Gleason Racing 17B.
A rare Sunday night show was next up, which took place at the LaSalle Speedway in LaSalle, IL for the Bill Waite Jr. Memorial. 35 Bumper to Bumper IRA sprinters check in for the event, once again Bill was able to wheel the Gleason Racing 17B to a 5th place qualifying result with a lap time of 11.419 seconds. By virtue of the qualifying result, Bill would once again start 5th in the 1st 10 lap heat race. As the field headed down the back stretch for lap 1, chaos broke out as cars were spinning, Bill was able to get the car slowed in time but was then ran over by the 2w which resulted in a flat RR tire. The red flag was displayed as the 2w ended up flipping, Bill headed to the work area & the crew got to work on changing the tire & checking everything else over. They were able get the car fixed & Bill rejoined the field at the tail. He needed a top 4 finish to move on to the feature, by the time the checkers flew, he had worked his way in to 2nd place, which locked him in the main event. He rolled the Gleason Equipment 17B from the 5th position for the 30 lapper. As the track slicked off, the drivers had hard time with the handle on their cars which resulted in the 1st of many caution periods on lap 2. At that point Bill was sitting in the 6th position; the field was able to go 3 more laps before another yellow this time of the 4B. Bill had worked his way in to 4th by the time a red flag was displayed on lap 8. There were 6 more yellows/reds before the field could complete 10 laps, which resulted in officials shortening the race to 20 laps. Once they were able to get racing, Bill quickly moved in to 2nd & had his eyes on the leader. It didn’t take long & he soon caught the leader & over took him exiting turn 4. Bill would complete the rest of the race unchallenged & go on to claim the checkered flag for his 10th win of the year & 25 of his short IRA career.
This week, Bill will have his B Squared Motorsports entry at the Oshkosh Speedzone in Oshkosh, WI on Friday, August 26th. Bill & the team did capture the last IRA event at the track in June. Saturday is an off day for Bill & the IRA.
To keep up on all the latest news regarding the team be sure to visit the team website at www.b2motorsports.com. You can also follow the team on Facebook at www.facebook.com/bsquaredmotorsports or on Twitter at www.twitter.com/bsqdmotorsports.
Sponsorship for the 2011 season comes from the following companies: Buesser Concrete, Hoeft Builders, Hepfner Racing Products & HRP Wings, Diversified Machine Inc., XYZ Machining Inc., Allstar Performance, K&N Engineering, Astro Titanium, Super Shox, BLZ, FK Rod Ends, B Squared Visual Solutions, Weld Racing, Outerwears Inc., Race Gear X, Gleason Racing Equipment, Maxim Chassis, Competition Driveline, Saldana Racing Products, Fibrestar Industries, A&E Collision and Service, and Xtreme Stainless, LLC.

Submitted By: B Squared Motorsports